It’s surprising to see how huge Chainsaw Man already is, as it’s typically an anime adaptation that truly makes a promising manga take off. Since this series is already a hit, a good anime adaptation would surely make Chainsaw Man explode as few other shows could. Judging from episode one, I can say with confidence that this series is shaping up to be a gold-standard adaptation — one that will please anybody with a love of visceral action.

It’s worth noting that this is not an anime for those who are averse to gore. Just like the original manga this series is adapting, there is a copious amount of blood and gore in essentially every battle sequence. Given the main character transforms into a chainsaw demon, it makes sense that this would be a violent series, but even I didn’t expect it to be completely uncensored. In just the first episode, characters are stabbed, chopped up, and shredded, which does an excellent job of immediately establishing that the world of Chainsaw Man is an intense and cruel one.

Even in such a cruel world, the main character Denji immediately shines as an upbeat beacon of goofy fun. While he’s shown to have a completely miserable life, Denji’s hopes and dreams (which consist of eating jam on bread and having a girlfriend) endear him to us and make his transformation into the titular Chainsaw Man immensely satisfying. Though it’s brief, his relationship with Pochita is also heart-warming, as the two outcasts provide one another with a moving friendship that culminates in the crux of the episode.

So far, every voice actor has felt perfect for their role. I watched the Japanese language version with English subs and was quite happy with the performances in this first episode. Kikunosuke Toya especially nails the contrast between Denji’s silly antics and his harsh, roaring voice as the Chainsaw Man. 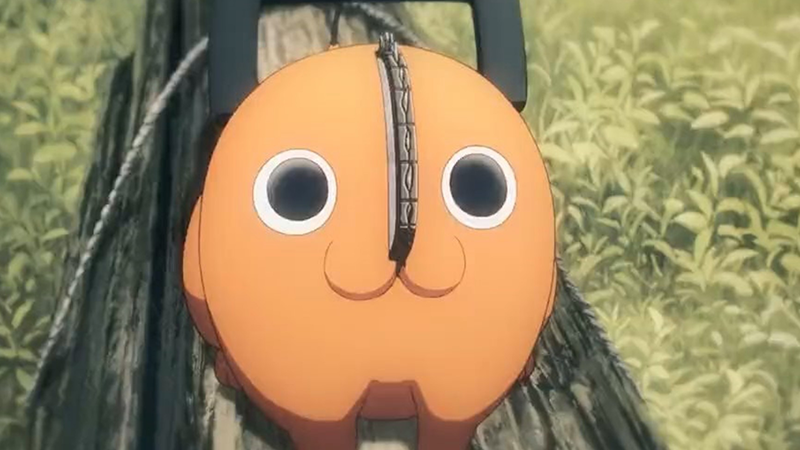 I couldn’t possibly discuss this episode of Chainsaw Man without mentioning its incredible visuals. There’s an elegant simplicity to Tatsuki Fujimoto’s art style, which is brilliantly realized in MAPPA’s animation. The scenery is gorgeous and the character expressions help sell the more emotional moments, while the use of CGI is smooth and solid. The action scenes are riveting to watch, with the scene of Denji mowing through a horde of zombies signaling that the fight scenes will be an ongoing highlight.

Episode one of Chainsaw Man serves as a fantastic start to what will likely be the most exciting and biggest anime of the fall season. So long as you’re alright with hardcore violence, you’ll be blown away at this exceptionally strong start. The characters are likable, the action is stylish, and the voice acting is impeccable. I can’t wait for future episodes, as the first installment is nothing short of terrific.

As ComingSoon’s review policy explains, a score of 9.5 equates to “Excellent.” Entertainment that reaches this level is at the top of its type. The gold standard that every creator aims to reach.

Disclosure: The reviewer was provided with a screener link for our Chainsaw Man S1E1 review.

Best of 2022 is ComingSoon’s weeklong celebration of the entertainment that made this past year so memorable. 2022 was a…
Anime 3 weeks ago

Maple, Sally, and the others’ adventures in NewWorld Online continue. Here are the details for Bofuri Season 2 Episode 1.…
Anime 4 weeks ago

There will be more mysteries left to unfold in the return of In/Spectre. What new encounters will Kotoko and Kuro…
Anime 4 weeks ago

Four years after the premiere of the first season, the second season of Vinland Saga is coming in 2023. Fans…
Anime 4 weeks ago