Though sports aren’t exactly my cup of tea, sports anime somehow manages to keep me absolutely enthralled. This is especially true of series like Blue Lock, which takes something as straightforward as soccer and makes it as dramatic, intense, and enthralling as possible. When you take 300 of Japan’s best soccer players, stuff them all into an isolated compound, and pit them against one another with heightened stakes, you get Blue Lock — and it rules.

While the concept of Blue Lock may be a bit outlandish, the stakes and pressure applied to the main character, Yoichi Isagi, are genuine. No one’s going to die or be gravely wounded if they fail at these soccer challenges, but they will have their dream of representing Japan destroyed forever. In a world like the one established in this episode, having your competitive dreams shattered is, in some ways, worse than death for these young players, which makes each test and challenge riveting.

Within this first episode, quite a few instantly eye-catching characters are introduced. You get an idea of each peculiar player’s personality just from their design and how they speak, so while there isn’t enough time in one episode for all these characters to define themselves, you get enough of a gist to anticipate what they’ll do in future episodes. This is one of the ways that Blue Lock is reminiscent of “death game” series like Squid Game or Danganronpa — it features a colorful cast of eccentric people who will certainly clash with one another constantly. I look forward to seeing how these diverse weirdos interact with one another in future episodes, as it’s quite a promising cast. 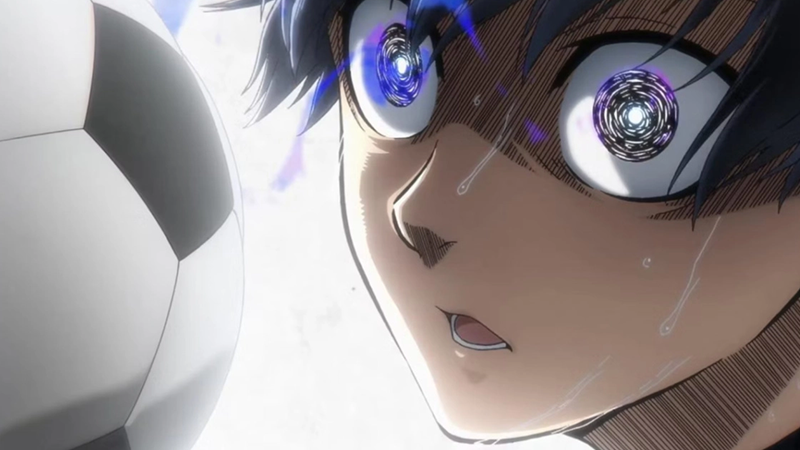 One thing I’m especially fond of is how Blue Lock hasn’t tried to make its protagonist noble or conflicted. He wants to be the best and is willing to sacrifice others’ dreams and goals to do that. He’s bothered by the “team” mindset that he feels has held him back — a mindset that is emphasized in this episode through quotes from real-life soccer players (some of which are real, others I can’t find much about). Many sports anime focus on teamwork, passion, and friendship, so it’s quite a shock to see one that has (thus far) centered on the self and on ego. I’m unsure as to whether it remains this way for the entirety of the series, but even if it’s just this way at the start, the approach is novel and serves as a great way of getting potential viewers interested.

Blue Lock also looks great, with stunning action sequences that put a good dose of adrenaline into the activity. The tense game of tag that the participants play is hyper-dramatic and fast-paced, even with the characters slowing down to think up wild soliloquies every now and then. 8bit, the studio behind Blue Lock‘s anime adaptation, seem to be doing an excellent job of instilling liveliness into the dynamic scenes, all without losing illustrator Yusuke Nomura’s distinct style.

Isagi reunites with Kunigami, Chigiri, and Reo. Their teams decide to play against each other for the next part of…
Anime 3 days ago

The Todoroki family offers their support to Endeavor. Best Jeanist and Hawks do the same and suggest the top three…
Anime 3 days ago

The mysterious machines turn out to be bombs. Vash apprehends the culprit, but Knives appears and destroys the town. Here…
Anime 1 week ago

Isagi and Nagi win their game against Barou and Naruhaya. They move to the next round. Here are the details…
Anime 1 week ago