The Witcher: Nightmare of the Wolf is out on Netflix on August 23, 2021. The film focuses on the witcher that trained Geralt named Vesemir and gives key backstory details for the hit series.

“The world of The Witcher expands in this anime origin story: Before Geralt, there was his mentor Vesemir — a swashbuckling young witcher who escaped a life of poverty to slay monsters for coin,” says the official synopsis. “But when a strange new monster begins terrorizing a politically-fraught kingdom, Vesemir finds himself on a frightening adventure that forces him to confront the demons of his past…”

ComingSoon Editor-in-Chief Tyler Treese spoke with The Witcher: Nightmare of the Wolf director Kwang Il Han about Vesemir as a character, the balance of action and romantic scenes, and the most difficult parts to direct.

Tyler Treese: Vesemir is such an interesting character. From your standpoint, what really stood out about him and made him an interesting protagonist for your story?

Kwang Il Han: Vesemir was chosen as a protagonist because Vesemir is a teacher to Geralt in the drama series. If you watch the show, you would know, but Vesemir himself didn’t turn into the witcher just by himself. So you can watch the history of Vesemir in the Nightmare of the Wolf and how Geralt was built. You know, the environment that built Geralt and the reasons why Geralt became the Geralt that he is now should be explained. Vesemir’s life is in fact an element to explain that. that is why Bessemer was chosen as a protagonist for this new anime.

The film is so great because of that backstory. It really goes deep into why there is such a stigma around witchers. How exciting is it that your film got to add such important depth and story to this beloved franchise?

It is quite important to expand the universe with a lot of depth to it. While there can be some things that go missing, for example, when you have an original piece and then turn it into a drama series or other art forms, there are definitely certain parts that are going missing. When those missing parts are shown, the audiences tend to get question marks and when they have question marks, their concentration level drops. So this anime, the Nightmare of the Wolf, is in fact a medium to complement that. 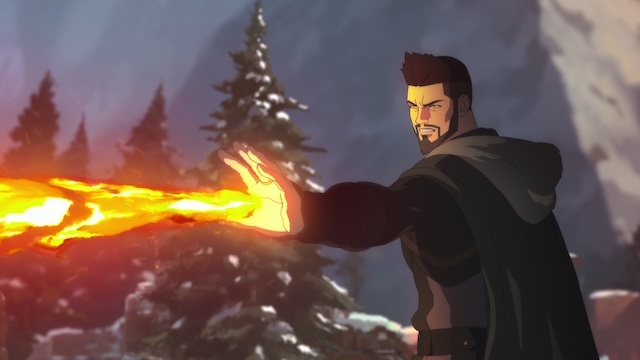 I would love to learn more about your relationship with the series. Were you introduced to it by the novels, maybe the TV show or the video games?

There are so many great action scenes in the film. Were there any animation sequences that were particularly tricky to direct?

So it was quite challenging all across the board, to be honest, but particularly for the action scenes. What is most tricky I would say is to portray the emotions. So, I mean, this is the emotion of the character right now, and what kind of action would portray it in the best way possible. That is the most tricky part and the most challenging part in the process. So the action scenes shouldn’t be just the violence that is shown based on the flow of the mind of the character, or then without any clear purpose, but then it should be an art form where you would fight with emotions. So representing that with the unconsciousness is something that I struggle the most with. Then I needed to make sure that a lot of elements are put in there so that the audience will be able to feel the emotions behind it as well. Especially the emotion heavy scenes at the later part of the show were quite tricky to make.

While there is action, there’s also a really touching love story in the film. Can you speak to that balance of having all those action-heavy scenes, but also having those emotional moments and really driving that home?

So there are a lot of action scenes here, but then it is not so action-heavy compared to my previous projects, the Nightmare of the Wolf is in fact focusing very much on the life of Vesemir. Even when there are action scenes, it’s actually part of Vesemir’s life. When I first took on the project, I remember that I talked to the writer Beau [DeMayo] that we should in fact add a little more love story elements to the story, but then it got rejected because he said that it will in fact undermine the storyline. But I still believe that the love story could have had more weight in the show. I actually focused quite a lot on building that love story a lot in the show to balance out between the two elements.

Marvel Studios has released a new behind-the-scenes video taking a look at how the Black Panther: Wakanda Forever underwater sequences…
Movies 47 mins ago

ComingSoon Editor-in-Chief Tyler Treese spoke with You People star and iconic comedian Eddie Murphy about the Netflix movie, which is…
Movies 24 hours ago

ComingSoon Editor-in-Chief Tyler Treese spoke to The Drop stars Jennifer Lafleur and Aparna Nancherla about the hilarious Hulu comedy, which is now…
Movies 2 weeks ago